My body is so confusing after a run. Whether I’m aiming for three miles or 13, I can make out all of the food smells and I just can’t wait to sink my teeth into all of the grub. And then I’ll sit down to eat and my appetite is either completely there or absolutely gone.

Even more than that, I’m having a hard time getting back into my training routine. Most running mornings I kind of want to run, but I mostly want to stay in bed all day. Since the weather has been somewhat cool in the mornings, I feel as though I can sleep in a little bit longer before my day is completely wasted.

That’s pretty much what this weekend had in store for me. Wake up late and run a little. Definitely a little. I only ran three miles this weekend, but I wanted all of the food. While it may seem a little unconventional, I decided to check out Babalu in Dilworth. Since it’s a tapas place, I figured I could start small and see how my appetite evolved. The weather was beautiful and we were seated outside. (I would have written that off to us looking like bums, but when we went to leave I saw plenty of people inside in workout gear.) Sitting on the patio was really nice, there was a breeze and we were able to watch a ton of people on their mid-morning run. Since Babalu doesn’t open until 11 on Saturdays, you would really have to have either just completed a late morning run, or a long one. Since we had an open schedule on Saturday, the timing was perfect. 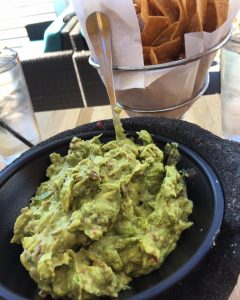 We sat down and the waitress was awesome and left a milk bottle full of water at the table so we didn’t have to repeatedly ask for refills. A huge win in my book whether you’ve been running beforehand or not. Ready to eat a little something, I immediately eyed the Guacamole Made Tableside. Guacamole is so light and refreshing when made fresh. Plus, since I’m usually not sure how hungry I’ll be, it’s a good tester. Not only did I discover that I was exceptionally hungry, but also that sundried tomato in guacamole is awesome. I had never had it as an addition before, but it is delicious! 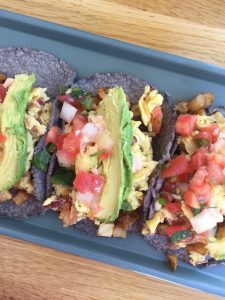 Since my body clearly thought I was replenishing calories from a marathon, I decided to order the Tacos Desayuno. I opted to add bacon to the tacos. Honestly, while you get a choice of what to add, you probably don’t need any of the extras. These tacos are a great balance of protein and fat, plus they are loaded. I often tell people that no one should be subjected to watching me eat tacos and this was no exception. I made a mess, but I don’t think anyone was judging. My boyfriend ordered single tacos – the pollo, carnitas, and a camarones. They were flavorful and also protein-packed. Of the three, the pollo was the favorite, but each had their own unique flavor. 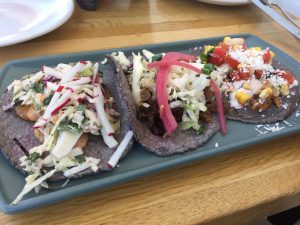 The next time you’re enjoying a beautiful run through Dilworth, consider stopping at Babalu. Just be sure that you’re parked nearby so you can walk, not run, back to your car in case you eat a little more than you intended like I did!