Beer, burgers and more beer are what’s up at Duckworth’s Grill & Taphouse.  We dined at the Ballantyne location, but there are 5 total in the Charlotte area.  Founded in 2004, Duckworth’s initially started with a menu focusing on Philly cheesesteaks/subs, fresh cut fries and ice cream.  The demand for beer far outweighed the desire for ice cream, so soon they offered over a dozen varieties of beer on top.  At dinner, we sat at the table and were greeted with a tablet that gave us the option of well over 30 different beers the Ballantyne location had on tap and ready for us to drink. 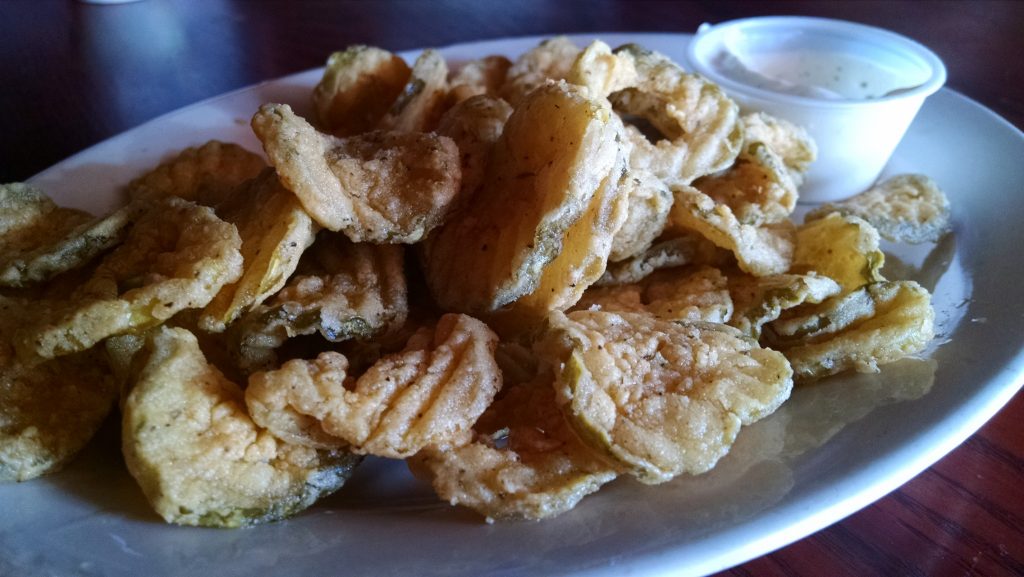 Fried pickles ($4.99) are often a grab bag.  Will they be pickle chips?  Spears?  Why just the elusive title of “fried pickles”?  Our curiosity was happily met with crispy, salty pickle chips.  Alongside the house ranch sauce, you can’t go wrong.  The fried pickles were like potato chips; once you start, it’s hard to stop!

Mommoo’s Wings (10 wings for $10.99) are a Duckworth’s special.  Named after the founder Rob Duckworth’s grandmother, this house sauce has 17 ingredients that really hits all taste buds.  Slighty sweet, hot, salty and sour; it keeps you guessing.  We also loved how crispy the wings were, despite being tossed in the sauce.  We realized it’s because the wings are first fried to a golden brown, then finished on the grill for that last bite of char flavor.  After the meal, we kept tasting the sauce by itself to try and list all the ingredients.  We’ll definitely be back for more wings. 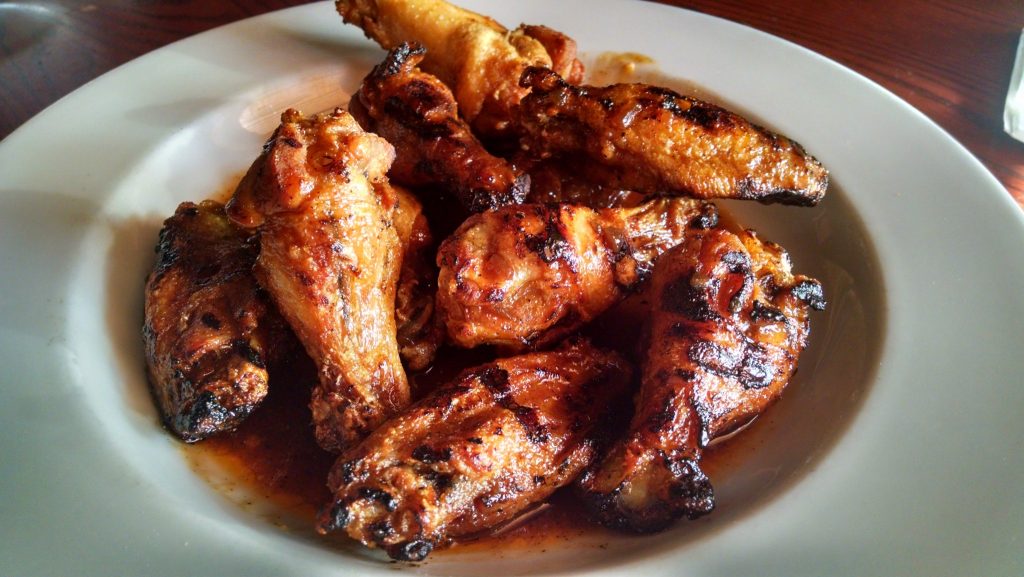 Next up was the Original Philly Cheesesteak ($10.99 for a 7” regular) with a side of hand cut fries.  We decided to get the Boardwalk Fries, which means they season the fries with Old Bay.  Season is a light word, as our fries were generously coated in the salty mix.  I love salty over sweet items, but these were almost unbearable.  The cheesesteak was a miss for me.  The meat was dry and there was no real flavor to the sandwich despite the grilled onions and provolone cheese.  As this is one of the signature items for Duckworth’s, it was more than disappointing. 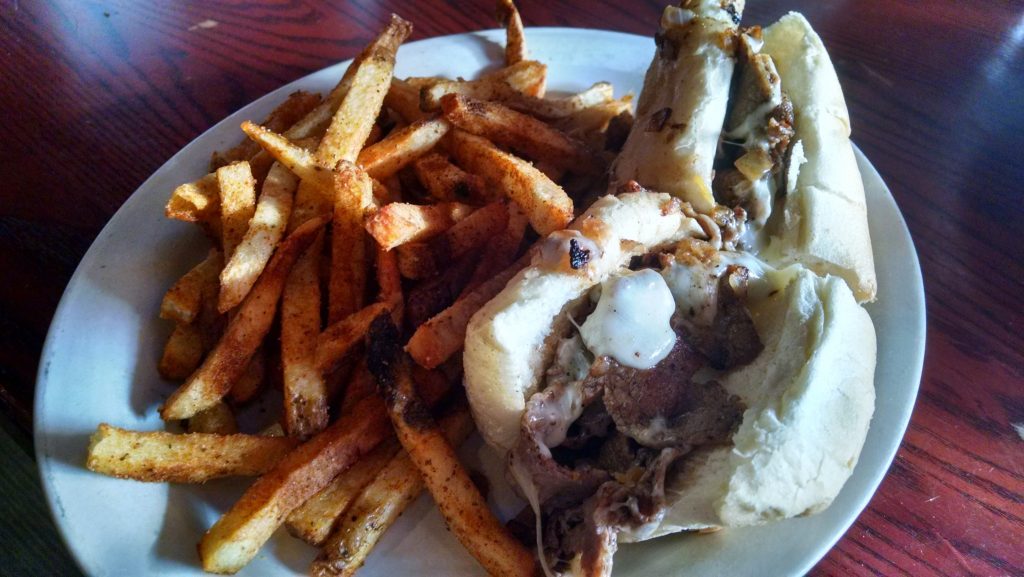 The Chorizo Burger ($11.99) was a mammoth of a burger on its own, but came with a side of hand cut sweet potato fries.  This burger was charred perfectly on the outside with a flavorful, juicy interior seasoned with the standard garlic and paprika from the chorizo.  Dressed up with pepper jack cheese, grilled peppers & onions, chipotle mayo and served on a sweet onion roll; this more than made up for the lack of “wow” from the cheesesteak.

Although Duckworth’s Grill & Taphouse has multiple Charlotte locations, I can see why it was bustling on an early Monday night.  The bountiful beer options, quick bites and a plethora of TVs playing every sports game really provide enough entertainment and standard bar/grill options for any diner. 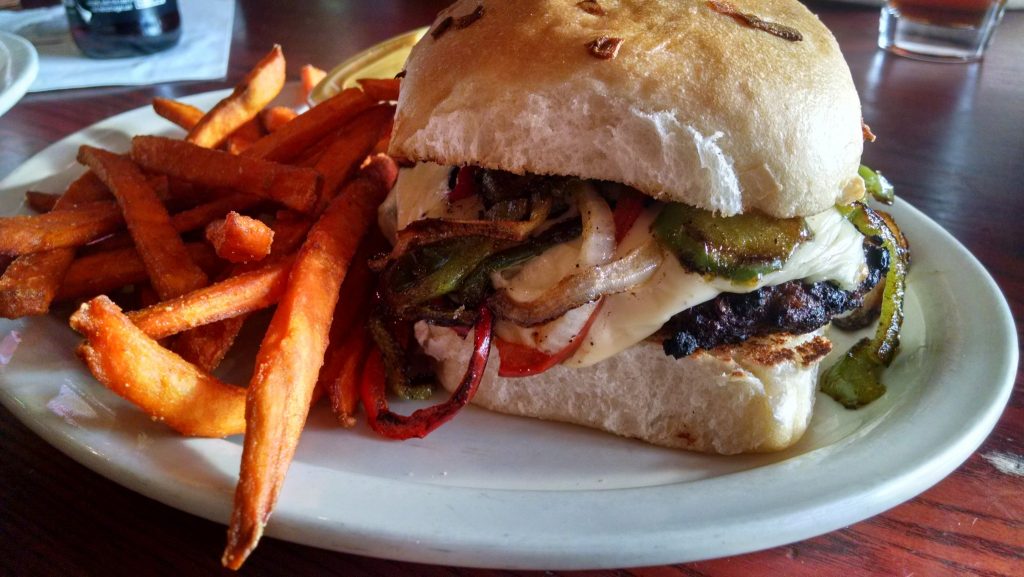 Tessa Nguyen is a chef and registered dietitian working in the Triangle area. She is an alumna of Johnson & Wales University and Meredith College. When Tessa isn’t traveling and discovering new food spots, she teaches culinary nutrition cooking classes at Duke and works as a consultant in the health and wellness industry. You can follow her on Instagram or Twitter @ChefTessaRD.