I was invited – with a guest- to take part in a Fitzgerald’s food tasting. I was quite excited for this opportunity as I had passed the restaurant during the St. Patrick’s Day bar crawl festivities and the line was so incredibly long I wasn’t able to get in. When I was asked to review the restaurant it was my chance to see what the deal was. 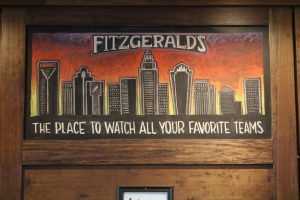 The first thing to note is Fitzgerald’s will validate your parking at the Wake Forest parking garage (its right next door to the restaurant) after 5 pm during the week and throughout the weekend. Something to take advantage of when heading to the restaurant since parking in Charlotte is sometimes difficult to maneuver.

We were promptly greeted and seated. I had scheduled out some time to be there so there wouldn’t be any surprises. I was able to take pictures without looking too creepy, too! Everyone was extremely accommodating in making sure I had access to whatever I wanted to take pictures of. The restaurant had a few tables seated already and I simply took pictures around them. The restaurant has two full bars and quite a bit of seating. I can only imagine what game day is like because there are televisions everywhere. Fitzgerald’s has a fun vibe – the kind where you’d actually want to go with friends and hang out because the atmosphere is fun and the food is fab. 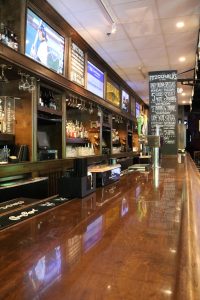 We were brought out an array of food. Instead of bringing just my boyfriend along, I could have brought a small group. We joked that this wasn’t tapas. Not even close. We took so many boxes of food home.

Here’s what we tried:

Irish chop house salad ($8.99) – You can add any protein to this salad when ordering. We had the dressing on the side, which really worked out because some people like heavy dressing and some people don’t. I’m in between. The salad was delicious though. I’m not a blue cheese person, but it worked. The dressing completely took the edge off of it. Also, I think potato strings on a salad might be my new favorite. 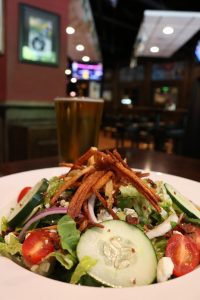 Shillelagh burger ($12.99) – I don’t recommend on a first date – it’s messy! On the other hand, it’s extremely filling. We started this after the salad and completely underestimated it. This would satisfy any guy. If you love meat, this is for you. If you’re ever stuck between a Reuben and a burger, this would be your compromise. Plus it comes with fries. Protein and carbs… mostly protein with a little bit of carbs. 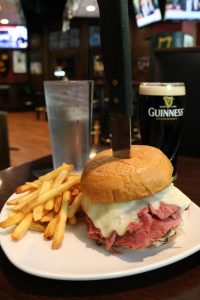 Fish and chips ($11.99) – This came with homemade tarter sauce. The batter is quite thick and is made with harp lager batter which is really flavorful. The batter is almost creamy if that makes sense, although I’m not sure if it conveys. The cod was very moist and Not overcooked at all. The cod was basically butter and fell apart easily. It’s not spicy, but definitely has some spice in there bringing out the freshness of the dish. The thickness of the batter probably protects the fish when cooking, but also adds a lot of weight to the dish. We found ourselves pulling the cod out to eat it alone, but that could also be because we filled up on the burger. The dish also included fries and coleslaw. The coleslaw was on the dry side, but seems like it was just made so no bad vibes here! 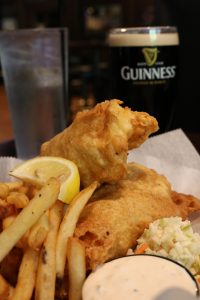 Loaded Mac and cheese ($11.49) – Five cheese blend with blue cheese, buffalo sauce and chicken. So creamy! I normally don’t like blue cheese, but you couldn’t even tell. The buffalo sauce was a great addition, especially since it was drizzled on top. It wasn’t insanely mixed in which didn’t take away from the blend of cheeses, but instead complemented it. The chicken had its own nicely charred flavor. The dish was basically a party in your mouth with all kinds of flavor. Don’t worry about not eating it all. I can assure you, this dish holds up once microwaved! Once you’ve taken it home and have a snack craving, this Mac and cheese dish perfect. 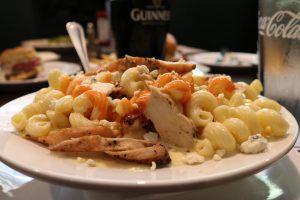 When you’re looking for something yummy to enjoy, stop by, enjoy a drink, and get ready for a massive meal!