x
When we walked in the NC vs Duke basketball game was on and the bar area was packed. Most of the seating area was full as well so I was worried that we would have a long wait for something that would be kind of mediocre. Instead, there was one table left and we were able to nab it. 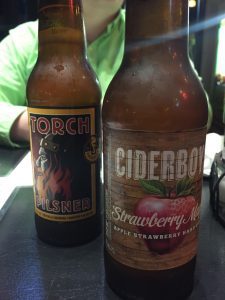 I ordered a water and decided to peruse the drink menu. There were taps all along the wall, but I don’t drink beer. It’s seldom that beer places have more than one cider so I wasn’t getting my hopes up. Instead, I was pleasantly surprised to see that there were five cider options! One from the NC area and four from the traditional cider areas. I tried the Cider Boys Strawberry Magic Cider. It was the only cider I had not heard of before and I was intrigued. If you like sweet, it was great. The cider had a nice strong strawberry taste with an apple cider undertone.
To start the meal, we ordered the fried pickles ($6) and the half tender platter ($6.50). The fried pickles were still a bit crunchy and really nicely breaded. They were accompanied by ranch as a traditional pairing. The pickles really set the mood for the rest of our food. I was expecting some super-fried mushy pickles, but these were clearly just made and ready to go. They were insanely hot and we waited awhile before we consumed the rest. The chicken tenders came with my choice of fries (shoestring, waffle, or sweet potato) and since I knew my meal was going to come with fries I opted for the sweet potato so I could pick a different variation with my meal. The tenders were also really well made. The breading wasn’t overwhelming and the chicken was incredibly tender. They were accompanied by a house-made honey mustard that was closer to mustard in flavor than honey. On their menu they recommend pairing the fries and the honey mustard and they are correct to do so. The pairing worked very well together. 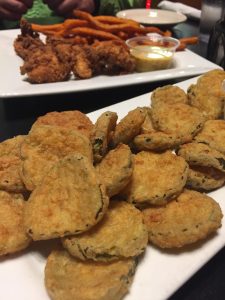 Since the food had passed our test so far, we decided to continue on. We ordered the house salad with ranch and added grilled chicken ($9 for the salad, $4 for the chicken) as well as the BBQ chicken sandwich ($9.5). The salad was loaded. The only item missing from the salad was onions, and I don’t doubt we could have added if we had remembered to ask in time. The salad had fresh iceberg lettuce and the chicken was also freshly grilled and steaming hot. The BBQ sandwich was a triple decker sandwich and was incredibly hot. About five minutes in I started to enjoy the sandwich. The BBQ wasn’t insanely heavy, instead it was a sweet tasting sauce. While I don’t know what the shoestring fries tasted like, I think the waffle fries were the best side option for this sandwich. 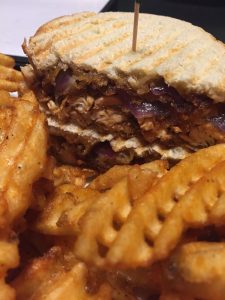 We were unable to finish our meals after the appetizers, but I am curious about their burgers so I’m certain we will return. The atmosphere was a fun one especially with the game on. I didn’t see many families, but it was quite late. I don’t see why this restaurant wouldn’t be family friendly during the day although I didn’t see a children’s menu. The service was quick and even though they were out of a few beers they seemed completely open to our needs. Plus our server didn’t get weirded out when I needed mayo for my fries. A win in my book. 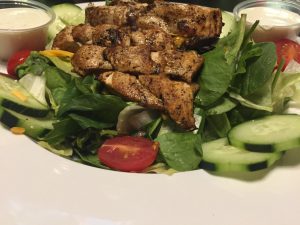 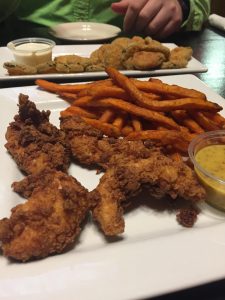 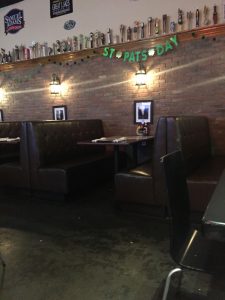