Yume means “dream” in Japanese, and also perfectly describes the tasty dishes served daily at Yume Bistro in Matthews, NC… Dreamy! Owner and Chef Tony and wife Rosanna created Yume Bistro to fill the void of authentic Japanese cuisine that has been missing from our Queen city and surrounding neighborhoods. The tiny space, tucked away in one of Matthews strip centers, is the epitome of a local hole-in-the wall joint. The decor- sparse.  The lighting- minimal.  And the seating – limited. But the food at Yume Bistro? Outstanding. If Rosena had told me the only way to get the Ahi Poke Salad was to sit on the floor, I would have happily obliged.  And Tony and Rosena are so warm and welcoming, you just feel special by being there.

I have a love for all things design, so… fun interior décor and unique restaurant design weighs in heavily when I’m choosing a place to dine.  This was not one of those places, but I’m glad I gave it a chance.  Upon entering Yume Bistro, do not be dismayed by the lack of décor and stark white walls.  It may seem out of place and bare, but believe me, the décor in no way matches the quality of food.  The creative dishes you will taste at Yume Bistro will take your focus off the four walls and down to your full fork.

Begin with the appetizers. They are every bit as delightful as their larger entrée counterparts. Our favorites were the Ahi Poke Salad and the Yume Hamachi. Both were super fresh, with very unique flavors. The Ahi Poke Salad at Yume Bistro consists of cubed salty morsels of fresh tuna, tossed in a level four spicy sauce. 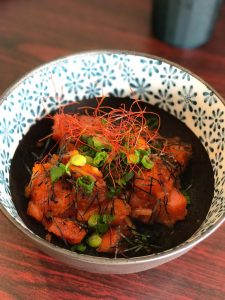 Similarly, the Yume Hamachi was four milder slices of fresh fish wrapped around cilantro, masago and onion and topped with a jalapeno and citrus soy sauce that allowed the tastes of cilantro and hint of jalapeño to peek through. 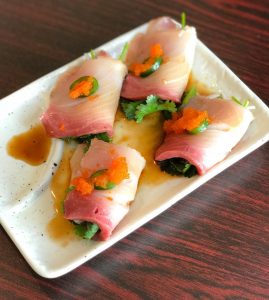 The Yume Bistro off-menu “Private Reserve” appetizer that Tony created for us was a favorite as well, but is not always available due to the ever-fluctuating supply of fresh catch. Which, today, happened to be a 1-pound giant (I mean GIANT) tiger prawn sliced over a smelt roe based spicy mentaiko sauce. (A first taste for all of us – but with its buttery lobster-like texture – will not be our last!) 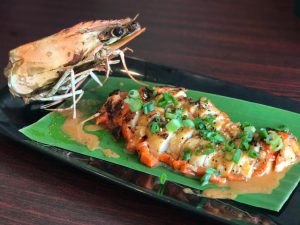 Or, be adventurous and try an order of Yume Bistro’s Takoyaki Octopus Balls. Relax… these are not, in fact, the actual reproductive parts of an octopus. But rather, crispy fried street food bites filled with creamy potato and chewy octopus. Giving you a trifecta of textures that is finished with a tangy takoyaki sauce. 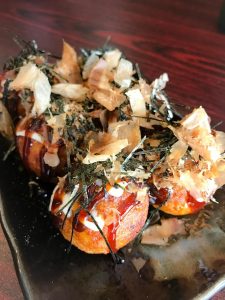 Seriously, you could make a meal out of just the appetizers, but save room for the entrées too. Have your pick… You cannot make a wrong choice on any of the food at Yume Bistro. All of the Donburi selections are rice bowl dishes, and all of the Ramen selections are noodle dishes.  Our favorite Donburi selection happened to be the special of the day- Salmon Katsu Curry.  The lightly crispy pan-fried salmon was delicious in the house made curry sauce, all served on a bowl of white rice. 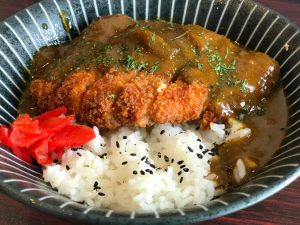 Don’t expect anything ordinary like fried rice or starchy Ramen noodles at Yume Bistro. Do expect to tip your bowl back and drink down all of Yume Bistro’s homemade broth. The different flavored broths are what separate the Ramen dishes. We could not pick a favorite for this category. All were delicious. The Tonkotsu Shoyu Ramen with pork bone broth and black garlic oil was layer upon layer of flavors. The pork chashu was so perfectly juicy and full of flavor, and together with the fermented black garlic oil added yet another dimension of taste. 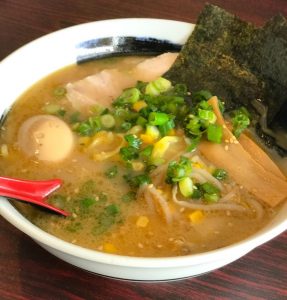 Our order of Shio Ramen with chicken chashu will soon be a new addition to the Yume Bistro menu. Chicken Chashu is made by tying chicken cutlets into a log and braising it until it is moist and tender. Then it is unbound and sliced before serving a top Ramen noodle bowls. This painstaking process results in a juicy, tender chicken that almost melts in your mouth. 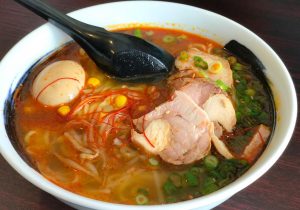 Pescatarians will love Yume Bistro’s Shoyu Ramen with curry flavor.  Add on the Tempura Shrimp, you will thank me later. The dish features a fish broth that is lighter in taste than both the chicken or the pork but still chock full of flavor. The bowl is topped with two long skewers of light and airy tempura battered shrimp that are perfectly fried to a crispy golden brown. 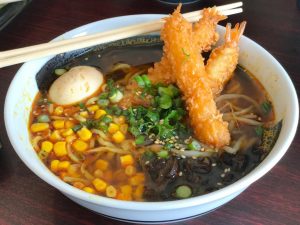 But the superstar in all of Yume Bistro’s ramen bowls is definitely the broth. Tony’s signature scratch-made broths are cooked for 20 hours and brings out flavors that you didn’t even know existed.  Flavors that complement each other rather than fight for attention. And flavors that will keep you coming back for more.